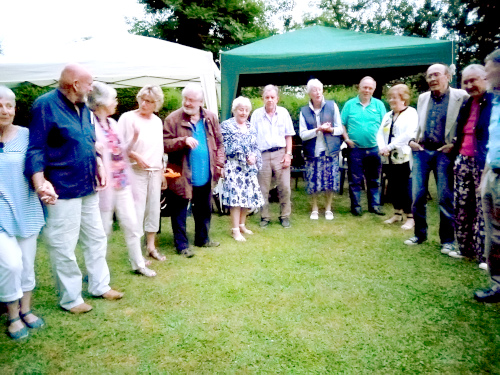 Campaigners gathered at the close of 10th anniversary garden party.

It’s ten years since the government axed the A350 Westbury Eastern Bypass. Five million pounds spent by Wiltshire County Council on developing the scheme went to waste. Forty millions of funding allocated by the Regional Assembly was transferred to a more sustainable project – dualling the railway between Swindon and Kemble – an unprecedented modal shift of money.

The Inspectors who examined the eastern bypass plan at a long public inquiry in 2008 condemned its transport case for not being good enough to justify the damage it would have done to the tranquil landscape of the Wellhead Valley which lies almost hidden between the town and the western escarpment of Salisbury Plain.

The old county council and its replacement unitary authority, Wiltshire Council (WC), tried to revive the road, so far without success. At the Examination in Public of WC’s draft local plan in 2013, WC tried to carry the safeguarded route of the bypass forward into the new plan. The EiP inspector agreed with our witnesses and legal adviser that the route should be deleted. WC reluctantly agreed to delete it from the map for the county’s development to 2026.

But Wiltshire Council officers and councillors have made it clear they want to revive the scheme. It is on the wish-list of roads supported by the Swindon and Wiltshire Local Enterprise Partnership as part of a fast ‘North-South link’ along the A350 between the M4 and the port of Poole. [See Local Transport Today #757 p.34 - copy available from WHA].

WC has declined to support our proposal for an extension of the Cranborne Chase Area of Outstanding Beauty round the western escarpment of Salisbury Plain to embrace the Wellhead Valley and the famous White Horse cut into the chalk of Westbury Hill.

On Saturday (6 July) supporters of the White Horse Alliance gathered for a garden party overlooking the quiet valley they saved from the bulldozers and the roar of fast traffic a decade ago.

Patrick Kinnersly, Secretary of the WHA since its formation in 2007, thanked the members of the Westbury Bypass Alliance who had raised more than a third of the funds needed for the expert witnesses and legal advisers who presented an overwhelming case against the road at the public inquiry and raised hundreds of pounds more on Saturday for the ongoing campaign against the A350 ‘growth corridor’.

He said: ‘If they can persuade council tax payers, housing developers and the government to cough up the money, which could be approaching £100m at today’s prices, Wiltshire Council will have another go at building this destructive road. Local people will be told it will improve their lives but they won’t be told that the council’s dream is to create a fast strategic road from Chippenham to Warminster and beyond to carry container lorries to and from the Channel ports, day and night.'

‘They won’t be asked if that’s what they want in the age of climate emergency or if there would be better ways to spend their money in an age of austerity when housing, healthcare, social services and public transport are all in crisis.’